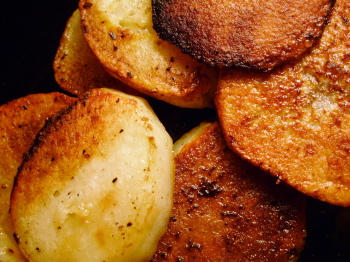 Skillet fried potatoes typically offer crispy, browned goodness when prepared properly. But the use of pork fat elevates them to a completely different level!

This was the result of having the right things around at the right time!

The plan was to make oven fried potatoes as a side dish. I can’t recall what the main was, but that’s unimportant! I had my potatoes sliced, patted dry and was about to put then in a shallow jelly roll pan to cook. I opened my oven, and there it was: my cast iron skillet, filled with porky goodness!

Having cooked some pork country-style ribs in the skillet the night before, the rendered pork fat was still in there. I hadn’t bothered to clean it out, but rather just tucked it away in the oven, for safekeeping!

A light bulb went off and I took out some of the fat, but not all. I carefully layered the potatoes as best I could in the skillet, and started browning them on the stove. The smell was incredible, with the hot pork fat making the edges of the potatoes crispy and brown. A careful flip, then a light sprinkle of Penzey’s Old World Seasoning, salt and pepper. I finished browning them in the oven, until they were tender but still very crisp.

No, I don’t have a clue what the main dish was on this particular night, but I sure remember these potatoes! 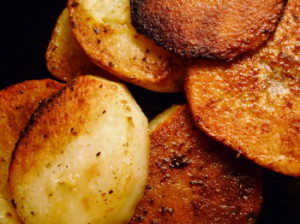