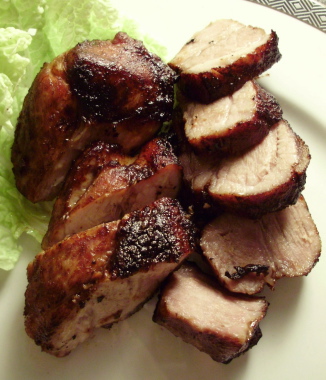 Thick, succulent pieces of tender pork are spiced up with a soy and sriracha marinade. A honey and soy baste provides a soothing, crispy finish.

This was another dish created “at the cupboard” so I don’t have exact measurements. But it basically went like this:

I placed the pork on a broiling pan and let the broiler rip at 475°. To the marinade left in the dish, I added dark soy sauce, more light soy sauce, and a good amount of honey. Stirred to combine to create the basting sauce.

Once the broiler got hot, I put the pork about two inches from the element. Once the browning started, I took the heat down, basted and let “bake” for about 10 minutes. Then I turned up the broiler again, until a good amount of browning occurred.

Turn, broil, baste, bake, broil, REPEAT. The trick is to not broil immediately after applying the honey-based basting liquid, as it will burn quickly. Keep and eye on it! The interim “baking” period allows for penetration of the basting mixture and more even browning.

I repeated the process until the internal temp of the thickest piece was 140°. Then I stopped basting and let it all “rest” in the oven, turned off, for about ten minutes. 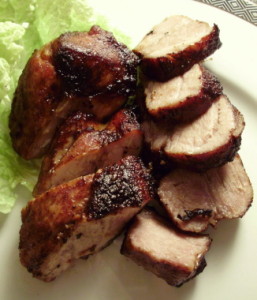 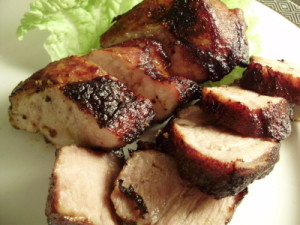