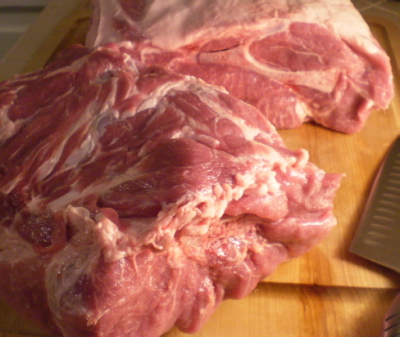 In Braise of Pork

Thirty-six pounds of pure porcine pleasure. Mmm, mmm! Wanna take a look at what I did with it? You know you do, doncha??

Truly, pork is one of the most versatile cuts of meat. It is also very affordable, especially when bought in bulk. Being able to buy whole shoulder is rare in a normal retail grocery store, much less at such a price (.69/lb!). I set out to make the most of my bargain buy! 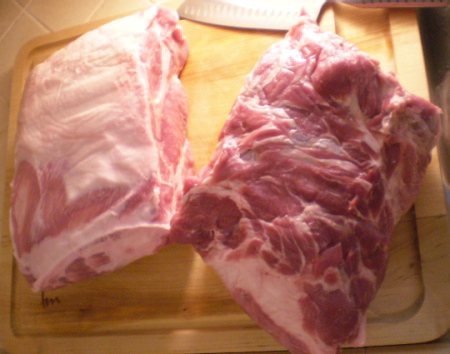 Sold as “Pork Shoulder Blade Whole” I was pleasantly surprised to find two pieces of meat in each bag. Weighing in right at 18 pounds, I was faced with two blade roasts, each about 9 pounds. (We’re looking at one bag here in the photos) 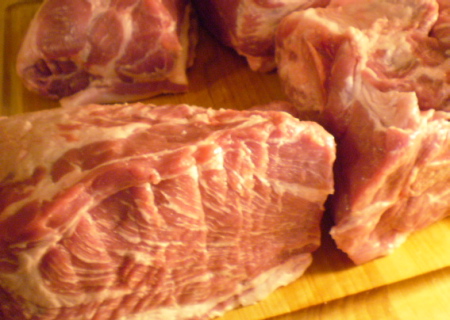 The blade bone typically runs through one side of the meat, and this allowed me to either leave the piece of meat whole, or cut it up. I chose to cut off the meaty, yet fatty, boneless portion, leaving the blade roast portion. Each blade roast was still a very substantial 5 pound size, and the boneless portions were each about 4 pounds. 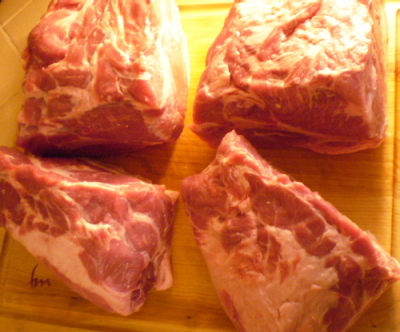 The blade roasts will be perfect for a number of dishes. My favorite method is a slow, indirect smoke/roast on the barbeque grill. Nothing is better, in my opinion, than the heat of the coals (no gas, please!) to render the thick fatty top layer into a crusty, delicious covering that bastes the meat beneath it. The slow heat also renders the meat perfectly tender, while infusing it with smoky goodness and flavor from the overnight marinade.

Blade roasts are most often braised, and with tremendous success. A nice browning of the outer fat and meat helps flavor the final product, and the addition of various liquids (wine, vinegar, juices, stocks) and aromatics (garlic, onion, celery, other herbs and spices) transforms this often-overlooked cut into a delicacy.

The boneless portions offer even more choices in cooking. As boneless roasts, they perform just as well as their bone-in counterparts, although one could argue about whether or not the flavor from the extra fat is better than the tenderness rendered by the bone! Fatty, yes, but once one understands the anatomy of this cut, the possibilities are limitless. Large, oblong lobes of meat are surrounded by layers of fat, and, cross-cut, provide a mesh of meaty pieces connected by fatty tissue. Cut in this manner, then separated, the result is meat perfect or stir-frys or stews. Cut in the other direction, it is possible to remove large portions of meat, suitable for quick-roasting (like a tenderloin) or to portion into medallions for steaks or a delicious osso buco. 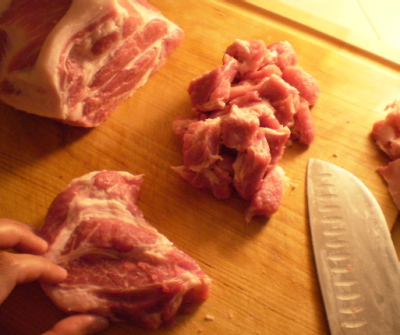 The shoulder roast is also the perfect cut to grind or process for use in sausage, dumplings, meatloaves, or burgers. The trimmed bones are perfect for flavoring soups, stews or vegetable dishes. The rendered fat can be a tasty addition to your breakfasts (eggs, biscuits, pancakes) or will make the most perfectly delicious fried chicken.

Yes, some may ask why I would bother with buying thirty-six pounds of pork. But with so many options ahead of me, I couldn’t imagine why not!!