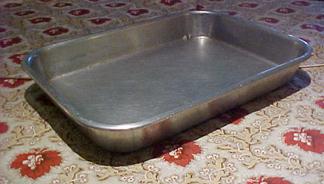 Do you know the Milchigs?

Love of a favorite pan leads to a lesson in Jewish custom. Happy Passover, with Matzo Love!

As a avid cook, I’ve become attached to certain items in my kitchen. If you have any interest at all in cooking, you know what I mean. I’m talking about the little enamel pot that makes the perfect sauce, the small oval dish that holds chopped chives, the dutch oven that holds your favorite cut of meat perfectly, the cast iron skillet handed down from generations before, or even your mom’s potato peeler. We all have our “go-to” items that we use all the time, sometimes several times a day.

In my kitchen of almost all Calphalon, cast iron and enamel, one of my favorite items is, surprisingly, a simple Comet aluminum cake pan. It’s not fancy, and it’s not very pretty. The beat up finish (or lack thereof) clashes with the other sleek, shiny items in my kitchen. It measures about 15 x 11 x 2, and I use it to hold and season meats. It holds exactly four New York strips or three ribeyes, a whole butterflied chicken (with no “hangover”) or four quarters, a whole 5 lb. pork loin or up to six pork chops. I can place a nice-sized roast in it with ample room to rub in my seasonings. After cooking, it of course holds all those items again, just before plating. I use it to carry my meats to and from the grill (washed in between, of course) and -oh- it holds eight to ten ears of corn beautifully. I’ve sliced meat in it, not worrying about damaging any special finish, and can see years of pits and scratches I’ve put in it. I’ve used it on the grill, rendering it totally black, only to scrub it down to reveal its aged aluminum surface once again. I’ve roasted potatoes in it, caramelized onions in it, and used it to hold pan fried noodles. In fact, the only thing I haven’t done with it is baked a cake!

I’ve owned this wonderful pan for about twenty years. But I was not its first owner. Many, many years ago, my brother-in-law helped a neighbor friend with a sudden move. A job transfer left this family with little time to pack and move, and they left many of their replaceable things behind, including many kitchen items. They left them to my brother-in-law to to dispose of as he wished. At the time, I was just beginning to build my own kitchen gear in a little apartment. So when Raymond asked me if I wanted anything, I picked this pan, for no reason other than I needed “stuff.” Over the years this odd little pan that didn’t match, from a family I had never met, would find its way into my daily repertoire. It would make the cut through three moves and end up prominently stored with all of my other prized pots and pans.

Each time I would use and wash the pan, I would think about the family that owned it before me. Now, mind you, it wasn’t an obsession or anything, just the kind of musings one has when doing dishes or driving down a dirt road in Kansas. There was a name written on the bottom of the pan: Milchig. I wondered about Mr. and Mrs. Milchig, what they looked like, whether or not they had kids (two, I figured), where the pan had gone (since they saw fit to write their name on it, I imagined it had held wonderful sweets and goodies and had spent the night at their children’s friend’s houses, perhaps after a lovely birthday party for Johnny) and where the family was now. Over the years I would wonder what Mrs. Milchig had prepared with the pan, and what she would think if she knew how much use I was getting out of her pan now! I wondered what delicious recipes she prepared in it. Roasts? Chicken? Pork? I wondered how her recipes differed from mine. Did she make desserts in it? Rice Crispy Treats, perhaps? Or maybe she rarely used it all, and that’s why it was left behind? I would think about the fact that their (perhaps imaginary) children would be grown (Johnny would be at least 25 now, and Megan would be graduating this year), and that if Warren and Barbara (that would be Mr. and Mrs. Milchig) had taken this pan with them, it might have been passed on to Johnny or Megan, and not me. And what would I be using now??

Yes, almost every day for the past twenty years, I’ve paid humble homage to the Milchigs, giving thanks to them for leaving the pan. The name is almost all worn off now, but I’ll never forget the Milchigs! 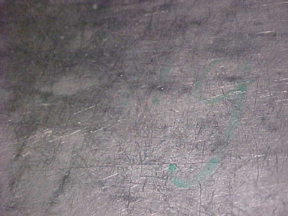 [However, just the other day, I was doing research on Passover. I was startled to see the word “milchig.” At first I thought, “Oh, I’ve found the Milchigs!” And I really had, in a way. Milchig apparently is the Yiddish term for items that contain milk or dairy products. “The Milchigs” weren’t “The Milchigs” at all. I suddenly didn’t know who they were. I was stunned. What I did know was that this family was Jewish, and obviously were Orthodox enough to keep dairy separate from meat! Not only was my fantasy of the Milchig family dashed (I was about to give them grandchildren in a few months), I had been defiling their DAIRY pan with MEAT! Pork meat, for that matter!! Oh God, er, G-d. Oy!

But, a Jewish friend assured me that I hadn’t done anything wrong, since clearly I wasn’t Jewish and didn’t know any better. I will continue to use my pan. And I will continue to thank MY Milchig family, wherever they are. My friend did seem concerned, however, that I had so thoroughly fleshed out my imaginary Milchig family. And I didn’t even tell her about Megan’s boyfriend, Marty Fleishig. But something tells me that relationship won’t last.