So I made my way to Randall’s, who got my vote for having the Best Deals of The Week. For those of you who don’t know me, I am a hoarder (see blog entry “Cooking Up a Storm”). I base my weekly shopping list and venue(s) on who has the best sales. And I buy alot. Why not? Many wonder where I get my hoarding mentality. To me, it’s just my nature. Is it hereditary? Something in my blood?

This week, the most alluring item was definitely the pork chops. Ninety-nine cents a pound. Amazing price! I grabbed my cart and dashed across down the right side of the store to find the packaged porcine portions in the end cap of the meat aisle, all shiny and glistening, lit from above by halogen spotlights. I took a breath, rubbed my hands together and quickly scanned the packages, looking for packs with the best selection and highest weight, since I was limited to only two packages. But….what have we here? I quickly discovered that the largest packages contained the least amount of pork rib or loin chops, the best and prettiest cuts. By packing more blade chops (when tend to be erratically sliced and a mess to cook) into a pack, they could maximize the selection of the loin or rib chops, which were packed into smaller packages, yet limit how MANY loin or rib chops could be purchased at one time. Some packs had eight blade and four ribs, others had as few as two rib chops! Damn them!! I searched and searched for the packs with the most rib chops and settled on two that had about six rib chops each. Satisfied with my pork chop bounty, I moved on to the Beef Bottom Round Roasts. Selection was better here. At $1.99 a pound (which my sister would later tell me was NOT the best price but oh well), I grabbed two good sized, nicely marbled roasts when SUDDENLY–an array of bright red, boat-shaped stickers caught my eye just beyond the roasts, hot dogs, bacon and shrimp cocktail rings. “Manager’s Special!” is what they said. All were stuck to packs of Whole Chickens Cut Up…. $.59 a pound! Oh My God. Such a deal! I quickly grabbed two packages of those. Pork…beef…chicken….oh yes!! 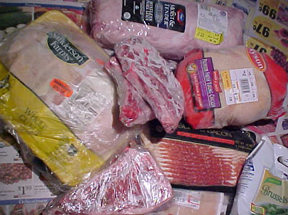 Exuberant from my kill in the Meat Department, I moved on to gather the other items on my list. As I was walking up and down the aisles, I noticed a cute, elderly Asian couple. How sweet, I thought. They reminded me of my parents, who often shop together at grocery stores, pushing their cart slowly down the aisles (shopping for sale items, scanning the shelves for good deals). I passed them in the Meat Department after getting my fill of chicken, and later came across them in Dairy (eggs were .79 a dozen). Still later, our paths would cross in the Canned Bean aisle. I was looking for white beans. Lo and behold, the Cute Elderly Asian Couple was there, and the woman was looking at….canned white beans! I politely paused and waited for her to make her selection. She picked up a can, held it up to her husband, who nodded approval and she began adding several cans to her cart. As I was waiting, my eyes drifted to their well-stocked cart. I was stunned to see the following: THREE packages of pork chops (each with at least EIGHT rib chops), THREE Beef Bottom Round Roasts (very nicely marbled), and THREE packs of Manager’s Special! Whole Chickens Cut Up (I didn’t remember that 5.3 pound bird). No doubt they would be sweet talking the checker into letting them buy more than the published limit! Cute Elderly Asian Woman looked up at me and smiled. I forced a smile back, bitter about her pork chop coup. But the beans….she didn’t take ALL of them, which were On Sale at .50 a can! As they wheeled their cart away, I quickly began loading my cart….