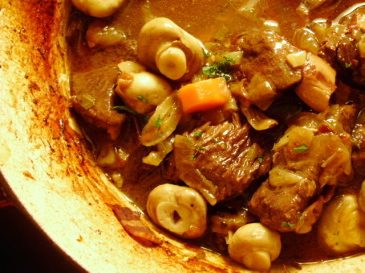 After seeing Julie & Julia last weekend, I was inspired to try this classic recipe. Was it as magical as portrayed in the film? Of course it was. Anything with this much pork fat can’t help but be magical!

Written with the home cook in mind, Julia Child’s recipe for Boeuf Bourguignon from Mastering the Art of French Cooking is indeed straightforward and easy to understand. Comments such as “[t]his browns the flour and covers the meat with a light crust” help one understand why she’s telling you to do something a certain way.

And it works. What became clear to me was that this recipe had been tested and fine-tuned to perfection. Following the recipe as closely as I could, everything just fell into place. Things started looking, smelling, and tasting like I thought they should, right from the start.
Even better, the recipe makes sense. Even though I wasn’t used to blanching bacon before browning it, I realized it was an important step, assuaging my fear that the smokiness would overpower the dish. While there is no shortage of bacon goodness in the end result, it is very well balanced with the other flavors, providing a deep, rich backdrop. Adding flour after sautéing the meat also made sense, ensuring a more delicate browned flavor from the flour (I was immediately reminded of how floured meat often ends up forming a burned, bitter crust on the bottom of the pot). Drying the beef before browning was also a brilliant tip; watching and smelling the beef brown up in the delicious bacon-fat-infused oil was amazing! Cooking the mushrooms and onions separately helped them retain their flavor and texture. Even the seemingly few added seasonings and herbs (only TWO cloves of garlic? ) all made sense in the end, bathing the tender beef in a sauce that was rich and flavorful, but not overpowering. 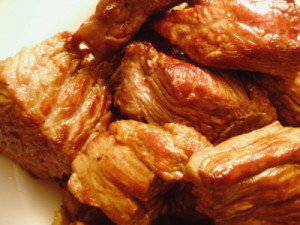 The browned pieces of beef (chuck) in repose 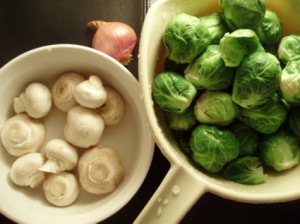 I chose to accompany the bourguignon with buttered noodles, adding only a little salt, pepper and fresh parsley. Roasted Brussels sprouts were my side vegetable, and I must say that their texture and slightly bitter edge provided a perfect foil for the rich, smooth sauce. So delicious!

I’ll be making this again; if I can stand to make it and not eat it right away I’ll serve it a day later. This morning I couldn’t help but pop open the container of leftovers and dig into a tender morsel of meat. Zapped for 20 seconds, the meat was even more flavorful and delicious than it was last night. Thanks, Julia! Your Boeuf Bourguignon is even perfect for breakfast! 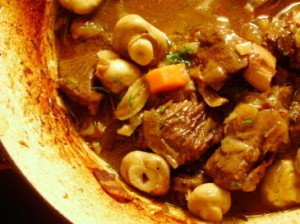 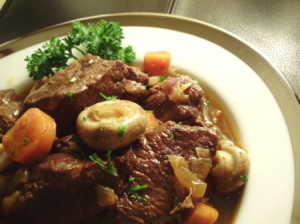 3 cups of a full-bodied, young red wine such as one of those suggested for serving, or a Chianti

Preheat oven to 450 degrees.
Sauté the bacon in the oil over moderate heat for 2 to 3 minutes to brown lightly. Remove to a side dish with a slotted spoon. Set casserole aside. Reheat until fat is almost smoking before you sauté the beef.

Dry the beef in paper towels; it will not brown if it is damp. Sauté it, a few pieces at a time, in the hot oil and bacon fat until nicely browned on all sides. Add it to the bacon.

In the same fat, brown the sliced vegetables. Pour out the sautéing fat.

Stir in the wine, and enough stock or bouillon so that the meat is barely covered. Add the tomato paste, garlic, herbs, and bacon rind. Bring to simmer on top of the stove. Then cover the casserole and set in lower third of preheated oven. Regulate heat so liquid simmers very slowly for 2½ to 3 hours. The meat is done when a fork pierces it easily.

While the beef is cooking, prepare the onions and mushrooms. Set them aside until needed.

When the meat is tender, pour the contents of the casserole into a sieve set over a saucepan. Wash out the casserole and return the beef and bacon to it. Distribute the cooked onions and mushrooms over the meat.
Skim fat off the sauce. Simmer sauce for a minute or two, skimming off additional fat as it rises. You should have about 2½ cups of sauce thick enough to coat a spoon lightly. If too thin, boil it down rapidly. If too thick, mix in a few tablespoons of stock or canned bouillon. Taste carefully for seasoning. Pour the sauce over the meat and vegetables.
Recipe may be completed in advance to this point.

FOR IMMEDIATE SERVING: Cover the casserole and simmer for 2 to 3 minutes, basting the meat and vegetables with the sauce several times. Serve in its casserole, or arrange the stew on a platter surrounded with potatoes, noodles, or rice, and decorated with parsley.

FOR LATER SERVING: When cold, cover and refrigerate. About 15 to 20 minutes before serving, bring to the simmer, cover, and simmer very slowly for 10 minutes, occasionally basting the meat and vegetables with the sauce.

Equipment: A 9- to 10-inch fireproof casserole 3 inches deep and a slotted spoon

Cuts of Meat for Stewing:
The better the meat, the better the stew. While cheaper and coarser cuts may be used, the following are most recommended. Count on one pound of boneless meat, trimmed of fat, for two people; three if the rest of the menu is large.
First choice: Rump Pot Roast (Pointe de Culotte or Aiguillette de Rumsteck)
Other choices: Chuck Pot Roast (Paleron or Macreuse a Pot-au-feu), Sirloin Tip (Tranche Grasse), Top Round (Tende de Tranche), or Bottom Round (Gîte a la Noix).

Vegetable and Wine Suggestions:
Boiled potatoes are traditionally served with this dish. Buttered noodles or steamed rice may be substituted. If you also wish a green vegetable, buttered peas would be your best choice. Serve with the beef a fairly full-bodied, young red wine, such as Beaujolais, Côtes du Rhône, Bordeaux-St. Émilion, or Burgundy. 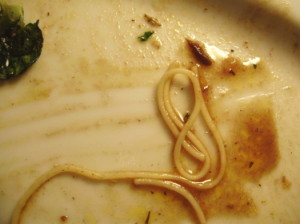 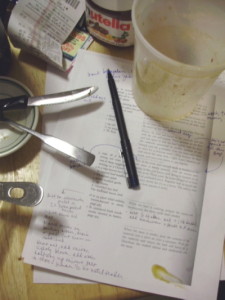 Braised Oxtails with Mushrooms and Onions