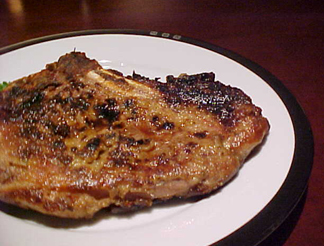 Michael told me the steak he’d had at the Y-O Ranch Steakhouse in Dallas had been “lightly breaded” after being seasoned with “spices,” soy sauce and red wine vinegar. BREADED?? A RIBEYE?? After being offended, I was curious enough to check it out for myself… 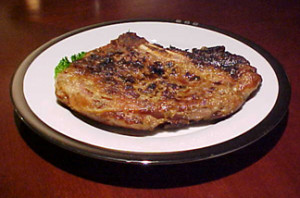 So I pondered the ingredients. Vinegar would act as a tenderizer, but I would need something to counter the tartness. Light soy sauce would add the needed sweetness, but would also burn. I would have to pat dry before cooking. “Spices?” Hmm. Left to my own devices, I turned to my cupboard. Penzey’s Chicago Steak Seasoning sounded like a contender. With straightforward garlic, onion, lemon, salt and pepper with a touch of hickory smoke, I figured I had a nice, flavorful mix of “spices” that wouldn’t overpower the meat. I rubbed a clove of garlic on the steak, then marinated it in the liquids and spices for about fifteen minutes and then dried it off. Then I “lightly breaded” it in flour with just some freshly cracked pepper added to it. Once the steak hit the hot shortening in the cast iron skillet, it sounded like a winner. The flour and soy sauce residue quickly made a browned crust on the surface of the steak. I turned the heat down just a notch lower than usual, to compensate for the sugars and the flour. My 1″ steak was browned in less than two minutes. I quickly turned it over and cooked it for another two minutes, then shoved it into a 350 degree oven. 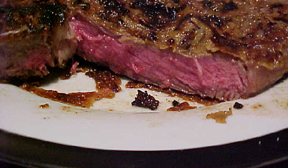 After three minutes, the surface of the steak crisped and gave me a beautiful crust. The interior was perfect; medium rare throughout.
The flavor was wonderful, a blend of the sweet and tart, the basic salt and pepper acting as accents to the meat.

The meat was tender, and the high cooking temperatures retained the natural goodness of the steak. 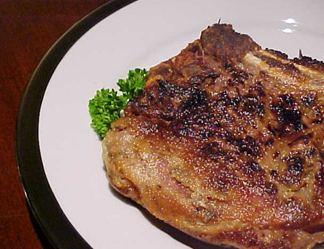 Subsequent trials of this recipe taught me this: do not marinate longer than 30 minutes. The vinegar becomes too pronounced and it messes with the texture of the meat.

This was a nice, different way to cook a steak. The crust was tasty and added a nice texture, and the marinade was flavorful without being too cloying.

But I’m not totally convinced this is the PERFECT way to cook steak….
:icon_biggrin:

Cooking The Perfect Steak – Part One