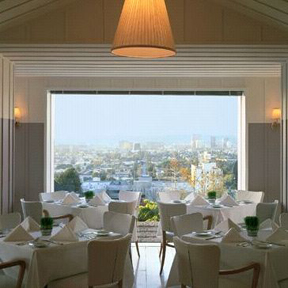 Posted by Gary Gee in The Dining Room

When I was told that we were going to dinner at Asia de Cuba, located in the trendy, posh Mondrian Hotel in L.A., I was skeptical. I expected overpriced, mediocre food, served by pretentious wait staff, in a stuffy, “what are YOU doing here” atmosphere. Boy, was I wrong.

It was one of the most memorable dining experiences I have ever had, and I am quite critical of how well an establishment pulls off its mission. Be it a down-home hamburger joint with vinyl tablecloths and rolls of paper towels, or a an elegant French bistro, if the experience doesn’t live up to what the establishment promises, I feel they’ve failed.

Asia de Cuba boasts a “fusion” menu, and with so many restaurants using that term loosely, I wondered how chef Christian Plotczyk was going to set himself apart from all the others. My answer came as soon as the appetizers arrived. One was a spicy oxtail spring roll, presented deep fried, with a refreshing mango/mint sauce. I was surprised to be able to discern the braised oxtail meat inside the roll, accented with, but not overpowered by, spicy, flavorful pepper of some kind. The refreshing mango and mint was the perfect foil to the rich, flavorful filling inside the roll. Our second appetizer was a special sushi roll. Lobster ceviche mingled with cucumber and nappa, rolled in plantains, of all things. Again, the individual ingredients were distinct, and the flavors and textures combined with great results. Garnishes included enoki mushrooms and the traditional wasabi and ginger, with a soy-based sauce.

The first dish was the lamb. Thin, perfectly grilled slabs of tender lamb covered the bottom of an enormous platter. The simple meat was garnished with a “salad” of wilted arugula, tomatoes, and peppers. Straightforward and sublime, the delicious flavor of the lamb was allowed to shine through. The second dish was “Pad Thai Havana.” Thick noodles were bathed in a beautiful orange-hued sauce, and the seafood surrounding the mound included mussels, clams, prawns and scallops. Although more of a paella in presentation, the flavor was definitely Asian, with the ginger and lemongrass-spiked sauce. Our third entree was a “pork roast.” Mimi had warned us that this was not going to be a pork tenderloin, or really any other expected cut of pork. Rather, this was going to be a slow-braised fatty cut of meat. What? Fat? In Los Angeles? I, for one, was thrilled and excited at such an anomaly! What arrived was a simple, white, welled plate, with light green bok choy visible against a mahogany-colored sauce. Sitting in the center was a rectangular piece of meat, the dark surface mottled with occasional veins of white, which I would soon discover was fat! I was not a stranger to this cut of pork. Indeed, I’d been shown and served it by my father, who explained that this cut was almost like a slab of bacon, but cooked so long and slow that the “greasy” fat cooked away. What was left was a delicate, delicious solid that literally melted in one’s mouth. The Chinese have been cooking it for eons, usually braised in a soy-based sauce. Now, I have no idea what the nutritional values were for this dish. I didn’t care. It was the most amazing thing I’ve ever eaten. The crunchy bok choy, the meltingly soft fat (whatever meat was there was decidedly not the feature on this plate) provided for a decadent, yet somehow comforting dish. The side dishes rounded out the table; Chinese longbeans, permeated with that smoky, mellow goodness that only comes from a searing hot wok, were served with crispy fried pork (yes, yes, more pork fat!). A fragrant fried rice, made with jasmine rice, was garnished with an unexpected dollop of what could be described as nothing but guacamole…fusion at its most basic, I suppose. It was a delicious accompaniment to our dishes.

Fusion was defined to me that night. It was not just ingredients prepared with a few key spices and techniques swapped back and forth. Here, dishes were deconstructed to their core, then remade in time-honored, traditional manners. Balance was the order of the day, and, perhaps in a nod towards the Asian side of the plate, the yin and the yang of the food was thoughtfully considered.

Details were key. Each dish was presented with a full verbal description of what was being served; lead crystal glasses were filled unobtrusively with water and tea. Service was attentive, but never annoying. The Philippe Starck-designed interior was painted with a cool, soothing white and grey palette. Stainless steel cuckoo clocks lined a far wall near a Dr. Seuss-scaled banquette upholstered in a sleek, white, textured fabric. White leather slipcovers zipped over the backs of simple chairs, and at first glance, the interior might be considered cold and inappropriate for fine, let alone comfortable, dining. But, upon closer inspection, one notices the familiar: hanging lanterns with oversized silk shades that might have come from your mother’s old table lamp, slatted walls that evoke a New England seaside cottage. A low, pitched ceiling in the center of the main, long space creates an intimacy that invites one to linger and take in the warm glow from the setting sun or the flickering candles on each table.

The evening was not inexpensive; dinner for four, including one bottle of wine and no cocktails, was $337, which included a (well-deserved) 20% gratuity. I thought it was a good value, given the quality of ingredients, presentation, and service.

I can’t wait to go again!