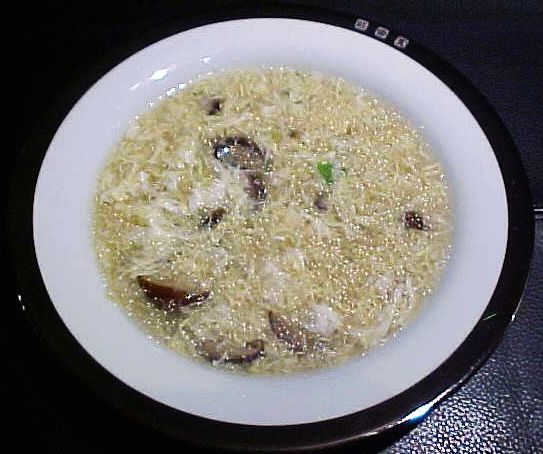 This is sort of a wild ramble on the makings of a good chicken stock and, afterwards, a good egg drop soup! Sounds like a lot of trouble, but once you’ve had the real thing, you won’t open a can or use those bouillon cubes ever again!

This recipe is more about basic method and philosophy about food.

Most Chinese cooking, in my opinion, is as much about the purity and freshness of the ingredients as it is about the preparation. Soups are a perfect way to showcase fresh, basic flavors. Thus you should begin with the freshest ingredients possible. Simple is better; you do not want to mask the natural goodness of the chicken stock with too many things. A good, rich basic chicken stock is a wonderful thing. It ranks right up there among fried chicken, steamed lobster and a simple grilled steak as the basic cornerstones of life itself!

Buy a fresh chicken. Size doesn’t really matter, but if you buy a large hen, the meat will be tougher. Keep this in mind if you want to use the meat for something else. Many cooks use the hens to make a good broth because of the size, but the meat usually isn’t served to guests, but eaten by the kitchen staff (peasant food). Smaller fryers yield more tender meat, but keep in mind you’ll be boiling this bird for stock, so the meat won’t be as flavorful.

You can use the prepackaged whole birds, or even pieces, but those have been previously frozen and the flavor just isn’t as full. These aren’t bad, and I usually use these to make stock myself, but the best flavor is in the fresh birds.

Ok, once you have the bird, rinse it out and pat it fairly dry. Save the neck, head, fat, giblets, whatever came with it. Get some salt, preferably coarse sea or kosher salt (my mom still uses regular table salt, but I like coarse), and liberally rub it all over the chicken, inside and out. Set aside. This sort of “cures” the bird and begins drawing out the flavors. Meanwhile put a pot of water on the stove. You want enough water to cover the bird, and then some. Choose a 5-8 qt stock pot with lid. Bring to a boil. Cut up your chicken into pieces. When the water comes to a rolling boil, add the chicken. Bring it back to a boil, then reduce to just a simple boil. Have a large spoon or ladle nearby and skim off any foam or sludge that comes to the top. You’ll find less of this with fresh chickens; previously frozen ones have more. Boil the chicken, stirring to rotate the pieces (oh, add the necks and giblets too) about 45 minutes, skimming until you have no sludge left. The pieces should look “spent,” i.e., the skin should be almost falling off and the meat loosened from the bones. Remove the pieces to a large, wide pan to cool. Fish out as much other stuff as you can, and strain the broth to get out all the smaller stuff. Taste the broth. You have not added salt (except that off of the bird), so it should be bland, but you should have a nice tasting broth. Pure is the word!

Now you can do two things: if you want the broth really rich, you can reduce the stock by continuing to cook it. Or, if it’s fine, you can make the whole thing into soup, or you can take a portion of it in another pot to make the soup, and keep the rest for other things. The uses are endless. I freeze some in ice cube trays to use for vegetables, gravies, etc, and keep a little fresh in the fridge for the same purpose. Whatever you choose, put that portion you want for soup in a pot, and keep it simmering.

Now then, once the chicken has cooled, again you have a choice: You can go to work and debone the chicken, cutting it into pieces for oh, say chicken fried rice, chicken salad, whatever. Or you can put it into the soup, but I like it without. The traditional Chinese way is to actually use TWO chickens in the broth, thus making it richer, cooking one to death, as we have here, and saving it for the peasants. The other chicken is cooked just until done, preserving the flavor and texture. That’s another recipe, and it’s fabulous. But this one is about soup.

(I generally eat the boiled chicken meat with a little sea salt or soy sauce on top. Do try it. Yum! Talk about purity in flavor! Nothing like it!) OK, back to the soup….

So once you have your soup broth simmering, break open some room temperature eggs in a bowl. I don’t know how many; I just use what seems right. Beat, but not too much. I like to have little bits of all white and little bits of all yellow in my soup. Makes things more interesting. Gradually bring the soup back to a boil (gives the water more “stored“ heat). Once it starts to boil, remove the pot from the burner. Now, you have to work fast: Start stirring the water with a wooden spoon at a velocity of…no just kidding. While stirring, gently add the eggs in a stream. The eggs should cook into ribbons. The heat of the water should cook the eggs to a nice texture. You do not want to cook the eggs over direct heat or they tend to get tough. Season with salt and white pepper. After serving, add about ¼ teaspoon sesame oil on top. Viola!

Now, some people like to thicken their soups with cornstarch slurry. Not me. Chinese restaurants do that all the time. Ugh. If you want it thicker, just use more eggs. You can add chopped green onions if you want.

And I don’t have to talk to you about adding frozen peas and carrots! Don’t do it!

So here you have a really basic recipe. You can experiment and add stuff like shiitake mushrooms, shrimp, crab, pork, etc….